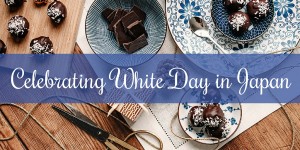 One of the most highly anticipated celebrations in the whole world is the Feast of Saint Valentine, more popularly known as Valentine’s Day. It is an annual holiday, celebrated on the 14th of February each year remembering and honoring one or more saints named Valentinus. During this time of the year, most people who are enthusiastically celebrating this day are the coupled ones or those who have found their life partners. Traditionally, Valentine’s Day is one of those times of showing one’s love to his or her beloved by giving flowers, chocolates, and gifts.

In Japan, Valentine’s Day is celebrated a bit differently because in their culture, instead of guys rushing to flower shops and chocolate stores to get their wives or girlfriends pretty things to have, it is the girls and women who give chocolates or handmade crafts to the most special men in their lives. Girls gift two types of chocolates; the “giri-choco” (or obligatory chocolate), and “honmei-choco” (or true feeling chocolate). The giri-choco is usually handed out to casual acquaintances, while the honmei-choco is higher-quality and given to the one she has romantic feelings for. Japanese women often prepare the honmei-choco by themselves as many of them think it is not true love if they just buy the ready-made chocolate at shops. That’s why weeks before Valentine’s Day; the malls in Japan are packed with cooking tools, chocolate ingredients, chocolates, and women.

It seemed funny to me at first not giving a girl something on Valentine’s Day. Last year, a friend of mine who is also an American and was in Japan for a vacation to see her Japanese boyfriend, got a bit dramatic when she didn’t receive any treat from the guy on Valentine’s day. I didn’t know what her problem was that time, so I wasn’t able to tell her about Valentine’s Day and White day. She was noticeably mad at her boyfriend, but the guy just kept on smiling and went on with his life. The day of her flight back to US (March 14), her boyfriend gave her multiple boxes of sweets that the guy had baked himself; one box had a message written on it saying how much he loved her, even though she hadn’t given him honmei-choco on Valentine’s Day. Of course, my friend gave her boyfriend a beaming smile and just like in the movies, they hugged each other and gave each other a kiss goodbye.

White Day is a special day celebrated every March 14, exactly one month after the Valentine’s Day. The Japanese have an unspoken rule that the gifts that they received on Valentine’s day should be returned on White Day with a gift of a value equal to two or three times the value of the Valentine's Day gift. So the girl still makes out under this arrangement.

Japan’s most popular gifts during White Day are cookies, jewelry, white chocolates, white lingerie, and marshmallows (white, of course; none of those colored marshmallows). Weeks before this day, the malls are packed with chocolates and other gift ideas to remind the guys about the White day.

Since the White day is an “answer day” for girls who have given the guys they like gifts on Valentine’s Day; the girls should be mindful of the gifts they will be receiving from the guys. If a guy gives you marshmallows, it simply means that he is not interested in you. So yeah, marshmallows are next to nothing, a disappointing gift.

White Day in Japan first originated in 1978, promoted by the National Confectionery Industry Association as an “answer day” to Valentine's Day, stating that men should pay back the women who gave them chocolate and other gifts on Valentine's Day. Since that year, the tradition has been celebrated annually not only by the people from Japan but also in countries like Taiwan, South Korea, China and other East Asian countries.