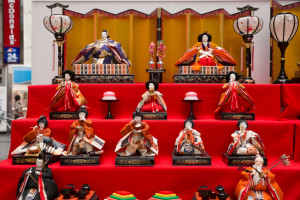 Every third day of the third month of the year, Japan celebrates the Girl’s Festival, more popularly known as the Doll’s Festival. The general word for the girl’s day is hina, which can be combined to form the word tachibina (standing hina) or dairi-bina (the seated royal pair of dolls featured in many displays). In Japan, the Doll’s festival is called Hina Matsuri, although there have been discussions that its proper name should have been Momi no Sekku, or the Peach Festival. The Doll’s Festival was said to be legally established in 1687. For many mothers and daughters in Japan the Doll’s Festival is the special time to pray for good luck and fortune in marriage and health.

A few days before the festival, families with daughters begin to display special dolls for Hina Matsuri called hina-ningyo. They are usually arranged on a five or seven-tiered stand covered with a red carpet. At the top are the Emperor and Empress. The next step contains three court ladies serving the Emperor and Empress sake, followed by five up to ten musicians, two ministers, and three servants ending the bottom row in a five-tiered display. There are also small pieces of toys, small meal dishes, semi-precious stones and other things placed in small boxes or treasure chests representing a dowry. Girls play hostess to other girls and also to dolls who are “fed” in tiny dish sets. A superstitious belief says that, if you don't put away the hina-ningyo soon after March 3rd, the daughter will get married late.

A traditional set of dolls can be very expensive and can cost more than a million yen depending on which grade a set of dolls belong. Some dolls are handed down from generation to generation. In the early 20th century it has become more of a tradition that every little girl should have a hina-matsuri display that is why many smaller and cheaper formats were devised focusing only on the royal couple. Grandparents or parents buy them for their daughters for her first Hina Matsuri.

In the ancient times, the Shinto religion always delegates March 3 as the day of purification. Hina Matsuri has some of its roots in this festival of purification, Nagashi-bina of Hina Nagashi (throwing awa of dolls). The use of paper dolls for the festival can be read in the Tales of Genji, a popular Japanese tale written a thousand years ago, and Fascinating Folds, History of Origami. Hina Matsuri originated as an ancient Chinese practice in which the sin of the body and misfortune are transferred to a doll by rubbing them all over the girl’s body, and then removed by abandoning the doll on a river.

Nowadays, Nagashi-bina rituals are still held in some Japanese shrines, wherein a boat full of big display dolls is sent to sea in connection with the Awashima Shrine of Wakayama Perfecture, a shrine particularly important for women who pray for good fortune in marriage and childbirth. The floating of dolls in the late afternoon of March is very symbolic for girls and women in a way that it is like taking away evils, misfortunes and sickness that the girls and women suffer.