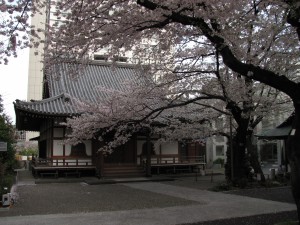 Living in Tokyo: the Hanami Party

The TJL team was recently invited to a Hanami Party in Tokyo. For those who don’t know of this event, Hanami translates as, “Flower Viewing.” Now, watching flowers are not among our favorite activities. But since the viewing includes a picnic with free flowing beer and sake, then it becomes a mandatory TJL holiday.

Actually, since our particular party was at night (after a hard day’s work doing whatever it is we do to pass the time); the correct name for the nighttime party is called Yozakura. What is interesting to me about Hanami is that it is a holiday that cannot be planned. That is, the exact day for flower viewing is up to the weather gods. It can be as early as the end of March and as late as the first of May.

The Cherry Blossoms bloom when the weather reaches the right temperature for the right amount of time, and fade away only a few days later. There is no, “I’ll get to it next week,” (unless you have the wherewithal to travel to other parts of Japan) attitude allowed. You have to seize the day and enjoy the festival when it comes. This is contrary to most foreigner’s impression of Japan; a place where trains run on exact schedules, meetings start and stop at exact times (our meeting agendas are set with five minute blocks of time), and every phase of life is carefully planned. Of course, even though the final date cannot be determined, the Japanese weather service keeps a close eye on meteorological conditions and informs the populace when the optimum time is near. As the southernmost areas warm up first, there is a “Cherry Blossom Front” that moves from the South to the North in Japan.

“Living in Tokyo is like living in the past and present: you'll enjoy the fine blend of traditional and contemporary living”

So on this particular night, we gathered near the park after work. There were only five of us from the office. Due to the recent tragic earthquake and problems with the Fukushima reactor up North, many of our Japanese office mates didn’t feel it was a good time to celebrate, so they didn’t attend with us. We made a stop for provisions at a Sunkus Combini.

It was about eight at night, and the park was filled with picnickers. We were lucky enough to snag a table just as a small group was leaving. This was very lucky for us, as the tables were quickly filled by waiting picnickers. The more prepared people in the park had had the forethought to bring blankets so they could sit on the ground, Japanese style. The TJL team prefers to take life as it happens, and we disdain such intense pre-planning. One of my co-workers said that the various offices would routinely send the junior member out to the park early in the day to stake out a space to be used by the office later that day. It has become a rite of passage to perform such duties in Japanese culture.

So, we sat down, opened our purchases and beer, and shared everything family style. While we ate, we chatted about work, upcoming transfers, and life in general. It was a very relaxing time. To finish up, we had a few toasts with the sake. Then, once again Japanese style, we separated the trash into burnable and recyclable, bagged it up and headed out. I noted that in the park, only for this festival, there were public trash bins. They were carefully separated and labeled as to permissible contents. On normal days, there are no public trash bins. The Japanese feel that public bins only cause more litter problems. And, whether it is due to this or the inherent neatness of the Japanese, there is very little litter to be seen in Tokyo. 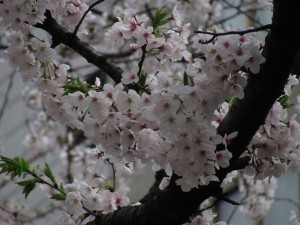 One of the reasons why I love living in Tokyo and why the Japanese love this holiday is that the short lifespan of the Cherry Blossom reflects the equally short nature of human lives. It is a celebration of the spirit of taking a moment to reflect on the transient nature of life, and how quickly things can change. They have a lot of poetry referring to this and it is an underlying theme in many movies, manga, and songs. Even if you don’t have Cherry Blossoms in your part of the world; take a moment today to think about how short life is and how sweet it can be, before it all fades away.

Living in Tokyo is indeed unlike anywhere in the world…

Japanese Culture and Traditions, Most Popular Posts, The Expat Experience