I know our legions of fans want to know how the TJL team is handling the recent events. Here is my recount of the last few days…

I was at work on Friday afternoon, in our secret underground lair, when the big quake hit. The first shakes weren't too bad, but once they lasted more than ten seconds, we knew it was bad. This was my first big quake, but when my co-worker got that look on his face, I knew this was serious. We crawled under the desks and waited it out. It seemed to last forever, with several big aftershocks, but no furniture fell down and our office suffered no damage.

Here in Tokyo (at least where I am), we never lost power, water or Internet connectivity. Cell phones were overloaded right away, as were the landlines. My family was in the states, so I stayed in the office. The office is much safer than apartments. Also, the subways were shut down right away for safety reasons.

We have satellite TV in the office, so we were able to watch the tsunami and reports as they occurred. I sent out some emails to the family since the Internet was still working.

It’s very common here in Tokyo for workers to live a long commute from work, because living in Tokyo is so expensive. Many of my Japanese co-workers ended up sleeping in the office.

I didn’t expect any calls since the phones were down. But our office has phone lines with US numbers that our company set up, we couldn’t call out, but for some reason people could call the US numbers and they would come through. I received an email from a company representative who forwarded messages to my family. I was able to give her the US number and my family members could call me, even though we still couldn’t call out.

Once all of the family knew that we were safe, I set up for a trip home. Google maps gave me a walking route from work to home and I prepared to hike back.

Earlier this year, Japan had an “Earthquake Day.” That is a day that everybody pretends that an earthquake occurred to practice and prepare. On that day, everybody was supposed to walk to work to ensure they knew how to get to work if the trains stopped. At the time, I thought it was overkill, and avoided the long walk. But now I wish I had made the trek. My other thought was that if we tried that in the US, nobody would do it. Hell, we couldn’t get the military to walk to work.

Just as I was heading out, map in hand, one of my stranded co-workers noticed and said that some of the trains had started running again (it was now about 11:00 at night). He checked on the Japanese website and found the one train line that was still running and had a stop close to my apartment. I assumed the trains would be swamped and unusable, but the station was not far away, so I went to see how long the line was. 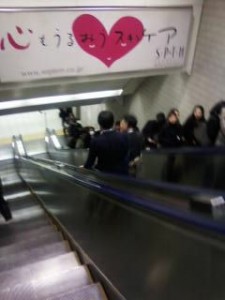 Japanese subway stations are huge, and this one was pretty full, but there was no panic. I did see some people running in the hallways, but as soon as they reached the train boarding area, they stopped and calmly got in line for the train. The boarding area is between the tracks for the outbound and inbound trains. I saw that the most crowding was on the outbound train. This was the result of the millions of stranded commuters who lived outside of Tokyo now trying to get out of the city. Still, there was no panic; they calmly packed the trains full. Then the doors shut, and the people in line waited for the next train. My train wasn’t crowded at all and I made it to my stop with no problems. I made a quick food stop at a 7-Eleven store, but the shelves were empty, the stranded workers had bought up all of the food in the store. I managed to buy some sodas and a bottle of wine (well, two), but that was all. 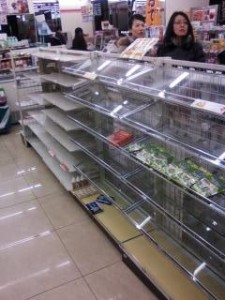 Empty Shelves in the Tokyo 7 Eleven after the Quake

As I walked the three blocks to my apartment, I noticed that the roads were packed with cars. It was the worst midnight traffic jam I had ever seen. Once again, no panic, but the streets were overflowing. 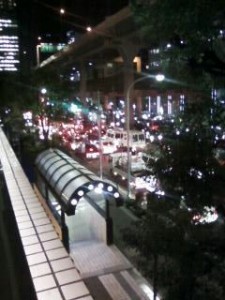 Midnight Traffic Jam after the Quake

I also used Facebook to update my status. I’m not a big fan of Facebook, but it was one of the few ways to communicate that stayed up all through the crisis.  My nieces and nephews use it all the time and I got responses from them quickly.

Since everything was working and there was no food in the 7-Eleven; I made myself a big pot of “spaghetti alla puttenesca” and grilled some Italian sausages I had been saving. That and bottle of 7-Eleven wine completed my repast. After a day like that, screw the diet.

So, here it is, two days later. We have had several aftershocks, some of which would have been considered major quakes before last Friday, but no more serious damage here.

Our next big worry is the nuclear power plant up north. There is no way to predict how badly that will turn out. But at least that is far away from Tokyo. Having spent a lot of time around reactors; the only thing I know is that I don’t know enough to predict what will happen. However, if it has anything to do with preparation and maintenance, the Japanese will have done the job perfectly. Unlike the Chernobyl incident, which involved a lot of lazy Russians; the Japanese take maintenance very seriously.

I’ve lived in a lot of countries during my career; I reflected on how some of the other places I have lived would have handled a disaster of this magnitude.

Italians? The crisis would have been made ten times worse by panicking and rioting.

Saudi Arabia? They would have blamed it all on the Zionists while the royal family flew somewhere safe in their private jets.

South America? I love the people, but they are not organized or equipped to handle disasters.

All in all, outside the US, this is probably the best place to be when a disaster strikes.

I still love Japan, but I might need to update my top ten list; it seems shallow to me now.

Stay tuned for further updates from the TJL team.