Using Your New iPad in Tokyo 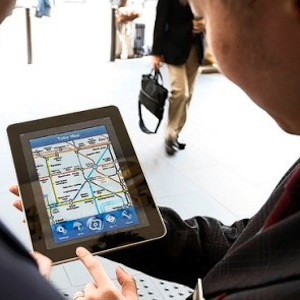 Santa brought me a very special gift this year, a brand new Apple iPad (the US version, not the local Japanese version). My research indicated that the 3G version was pretty much useless in Japan (due to differing phone standards), so in my letter to Santa, I requested an iPad 32 GB, Wi-Fi only model.

First, I need to address some complaints I have received from others. I know people who refuse to buy an iPad because the units cannot be used immediately as standalone devices. The set up and registration process requires that the new iPad be connected to a computer (Windows or Apple) that has a current version of iTunes installed, to complete activation. While it is a pain, I can see why Apple does business this way. First, Apple wants to ensure that you get the latest software updates. Secondly, this is a great chance for Apple to introduce the upsell to the Apple iTunes Store. While I don’t particularly like the forced marketing path, as an admirer of great salesmen (and Apple’s Steve Jobs is probably the greatest) I must commend the ingeniousness of the technique.

I was anxious to use this baby as soon as possible. However, the setup has to be done correctly. Here’s the process I followed:

First make sure the iPad is charged up. Turning on the new iPad gives you a graphic instructing you to plug it into a USB port. I then made sure that my home computer was on and connected to my StrongVPN account. As noted in previous articles, I use the highly recommended StrongVPN service to emulate being in the US. This is very important for the iPad's registration process.

Next, I plugged the new iPad into my home computer and waited for the magic to start. Oh snap! I didn’t have the latest version of iTunes on my Windows computer. OK, download and install – check. Register a new iTunes account – check. Give them a default credit card for my purchases – no way! Fortunately, you can bypass this part and continue with your iTunes setup. This is part of the upsell path that our friend Steve Jobs wants us to follow. Apple makes it extremely easy to purchase items from the iTunes store. I recommend skipping this step for now. Don’t worry, you won’t miss your chance to register a credit card, they will ask you again (and again, and again…)

The first thing it did was ask me to activate the iPad, agree to a long set of “Terms and Conditions” and register the iPad. Since I have the 32 GB, Wi-Fi only model, I chose to NOT use the auto-sync with my media. I don’t want the iPad's Hard Disk filling up with crap that I can easily stream from my home network. A little internet research shows this as one of the top hints for the iPad.

Next, the iPad told me that I needed a major software upgrade. The current version of the iPad software is 4.2.1. My version was a 3 dot something. So, I was forced to wait for a software update. This is another way Apple keeps their machines in line. The forced updates are a pain, but in a world of daily hacks and attacks, updating is the best line of defense. The upgrade took about twenty minutes on my machine.

Once upgraded, I was able to access the iPad’s home screen. After a celebratory drink, I next set up my Wi-Fi connection to my home network. Note that my Wi-Fi connection does not go through the StrongVPN service, but since I had already registered through my home computer’s VPN connection, I had no trouble with the iPad thinking I wanted Japanese as my native language.

As soon as I tried to download some free Apps, Apple once again notified me that they needed a credit card number to activate my account. They do reassure you that this card will only be charged when you do buy something. I gave them my American Express card number. At least with American Express, I’ll be paying off my TV addiction on a monthly basis instead of paying interest charges for old TV shows.

I still had trouble with some TV shows and the Apps store. I figured it was due to my Wi-Fi network NOT being routed through the StrongVPN service. This lets Apple know that the iPad is in Japan. Those untrusting wretches at Apple were choking off my access. Therefore, I needed to set up VPN service on the iPad.  As noted in a previous blog entry; StrongVPN, my recommended VPN service, has a special running that will allow you to have TWO accounts, with the second account only $2.00 extra per month (billed quarterly). That’s $17.00 a month for two computers, or in this case a computer and an iPad. If you’re living in Tokyo and you think that’s expensive, you are in the wrong country; skip your next visit to Starbucks and get StrongVPN. You’ll thank me in the future.

I went to the “Settings -> General -> Network -> VPN” section of my iPad. Next, I turned VPN “ON”, which opened up the “Add Configuration” section. I entered the information provided by StrongVPN and set up the service.

The next time I went to the App Store, I was able to browse and download applications. The first App download was for the free Kindle reader software. As noted in another post, I am a big fan of the Amazon Kindle and the ease with which you can purchase and download books. As noted in my other post, the Whispernet service even works in Japan, but at a higher cost. With the iPad and a Wi-Fi connection, I can download books from Amazon wirelessly without any extra charges. I was able to register my new iPad as a Kindle device and view the Kindle books I had previously purchased in my Amazon account.

I still believe that the Amazon Kindle is a better reading device due to the longer battery life and less eyestrain; but the iPad also has an important place in my gadget lair.

I also did a quick check of the video store and was able to download and view the free samples of some of my favorite TV shows.

So there you have it, a quick introduction into setting up your iPad in Tokyo. Please use the comments and let me know what your favorite Apps are.

Most Popular Posts, The Expat Experience