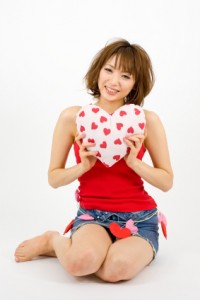 The girl of your dreams offering a "Honmei Choco" gift.

One thing I have noticed since arriving in Japan is the way that the Japanese are willing to grab onto the traditions of other cultures. From the Santa suit-wearing pizza delivery men of Christmas, to the Halloween costumed pretty girls of Roppongi on October 31, to the compulsive chocolate gifting of Saint Valentine’s Day.

In the case of Valentine’s Day, the Japanese outdid the crass commercialization of our Western culture by splitting the holiday into two separate occasions. They have “traditional” Valentine’s Day on February 14, in which the local twist is that females give gifts to male friends and co-workers. Then, one month later, on March 14th, they have White Day, in which it is the guy's turn to give gifts to female acquaintances. Of course, in Japan, receiving a gift from someone imposes an obligation to reciprocate.

Valentine’s Day was imported into Japan sometime in the 1950’s, according to my friends. Some commercial genius dreamed up the White Day event in the 1980’s to take advantage of the Japanese sense of obligation. I have also heard that the   custom is for the male to spend three times as much for the girl’s gift on White Day as the value of the gift he receives on Valentine’s Day.  Only a couple of my friends have heard of this tradition and they say that it is not generally followed. It sounds like a way to further increase sales in March. However, it is common for the White Day gifts to cost more than Valentine’s Day gifts.

Reports indicate that more than half of the country’s yearly production of chocolate is sold around Valentine’s Day.

My Japanese friends freely admit that this is just a commercial tactic driven by chocolate makers and stores, but they enjoy the tradition anyway.

So, as a guy living in Japan, what kind of chocolate will you receive? It depends on your relationship with the gift giver. There are two different levels of gifts given. For casual acquaintances and co-workers, girls will give “Giri-Choco.” This translates as “Obligation Chocolate” and indicates no strong attachment. In other words, don’t take a box of chocolates as a sign of romantic interest from your OL (Office Lady) co-worker.

The other type of gift is known as “Honmei Choco” and translates as “True Feeling Chocolate.” This would be a higher class of chocolate given to boyfriends, prospective boyfriends, and husbands. If you receive a box of chocolates from a girl that is of considerable higher quality than that given to the other males in your group (especially if it is homemade chocolate!), you are probably the recipient of “Honmei Choco.” In that case, humbly accept the gift with gracious thanks and start thinking about how you will reciprocate in one month. In this case, tradition dictates that you return a gift of higher value to the girl if you are interested. Returning a gift of equal value (or no gift at all) indicates an intention to cut the relationship.

A quick note on gifts, for most it goes without saying, but you don’t immediately open a gift in Japan. It is considered polite to wait until you are alone to examine the contents of the box. To pop open the box and start eating the chocolates right away would be considered rude.